Designed to fit your needs. Exactly. 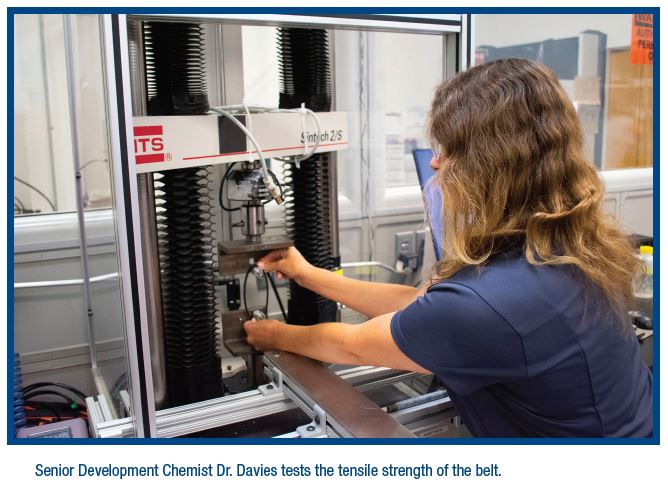 “The first iteration did not have sufficient torque strength for this particular application, but it did bring high tensile strength and high tear strength,” said Dr. Mary Kate Davies, Senior Development Chemist. “We were looking for high tensile strength so that the belt wouldn’t stretch in use. And tear strength was important because the belt needed to be resistant to any nick or sharp edge on a pulley. Often a material will have good tear strength either at 90 degrees or 180 degrees, but not both. We needed both.”

The company launched a major initiative to find just the right combination of tensile strength, hardness, elasticity, abrasion resistance and wear characteristics. Going through the different iterations was critical.

“We couldn’t get to this without a unique blend of stiffness, abrasion resistance and a multitude of other properties we were able to obtain,” Applications Engineer Eric McCormick said. “It’s about the right combination of things. Without the properties of these materials that we were able to get in there, it’s all a moot point.”

After evaluating several alternatives, including steel, the team settled on a carbon fiber reinforcement to help the belt to withstand the torque. The group felt the steel, with its sharp edges, would present too many safety concerns. To finalize the reinforcement options, the team drew on the experience of its colleagues at Michelin.

And, after developing more than 30 formulations for the outer material, they settled on a prepolymer with just the right combination of hardness and elasticity, dialing in the properties they wanted by adjusting chain length, curative, and additives. Next, the team combined the new material with formulations already in use and the carbon fiber reinforcement.

The project was a good illustration of the partnership the company forges in developing cutting-edge applications, both internally and externally. An entire group of chemists, applications engineers and production staff collaborated on the project.

The company provided several iterations for testing, which became an involved process itself. Testing specialties included wear resistance, tensile strength, tooth sheer and dynamic testing. In one case, there was a differential in speed that was critical, causing a delay between the= back of the belt and the inner, or tooth, side. Enough to be noticeable, at any rate, in a robot expressing “angry emotions.”

“Mary Kate and I went back and forth a ton of times during this entire project, saying, ‘Here’s what they’re looking for. But we don’t have a test for that. Okay, maybe we can test it like this,” McCormick said.

However, after the development effort, the work was still not complete. The R&D and applications teams worked with the company’s operations group to make sure they could manufacture the belts efficiently and repeatably.

GET IN TOUCH TODAY

Call or email us today to speak to one of our experienced and knowledgeable team members.

This website uses cookies to improve your experience while you navigate through the website. Out of these, the cookies that are categorized as necessary are stored on your browser as they are essential for the working of basic functionalities of the website. We also use third-party cookies that help us analyze and understand how you use this website. These cookies will be stored in your browser only with your consent. You also have the option to opt-out of these cookies. But opting out of some of these cookies may affect your browsing experience.
Necessary Always Enabled
Necessary cookies are absolutely essential for the website to function properly. This category only includes cookies that ensures basic functionalities and security features of the website. These cookies do not store any personal information.
Non-necessary
Any cookies that may not be particularly necessary for the website to function and is used specifically to collect user personal data via analytics, ads, other embedded contents are termed as non-necessary cookies. It is mandatory to procure user consent prior to running these cookies on your website.
SAVE & ACCEPT